Heroes Among Us Series

The “Heroes Among Us” story series will be released twice monthly, featuring local heroes and organizations that exemplify the Totally Texas, All American spirit that is the fabric of the Gainesville Community. Stories are contributed by the City of Gainesville, Gainesville Area Chamber of Commerce, Gainesville Economic Development Corporation, Gainesville Independent School District, and North Central Texas College. Keep an eye out for the stories and see who we celebrate next!

Release is coordinated by the City of Gainesville. 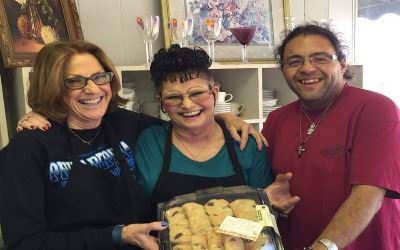 Today’s Heroes Among Us are the volunteer partners at Second Time Around Resale, a mission of First United Methodist Church.  It started in 1976 when Eula West and friends at First United Methodist Church began a journey based on compassion and love for the under privileged.  They started a mission out of a little rent house and began collecting women’s clothing to sell very inexpensively to the community.

The mission grew throughout the years and today resides at 105 S Denton St.  The building had housed Lone Star Gas and it was part garage, part office and all without air conditioning.  It did have a huge fan and a washer and dryer.  Soon the new space enabled them to expand their items to include men’s clothing, children’s clothing, shoes, toys, furniture, books, jewelry, household goods, art and electronics.  And so, they continued their mission work while praying for a way to make building improvements. One day their prayers were answered when a diamond ring was discovered in the pocket of donated clothing.  They searched and searched for the owner who never appeared.  It was a gift that helped them get their building in better condition – volunteer partners worked on installing air conditioning, a level floor in the garage, a new water heater and some paint.

STAR is a site of ministry.  Many donations come when there is a death; a loving husband who honors his wife with her clothing perfectly folded or others who can hardly speak as they release belongings of someone beloved.  Many recipients come when there seems nowhere else to turn; a mother and children from Abigail Arm’s trying to restart, a family desperate to find new items after a fire or a man who made some bad choices beginning again as he nears release.  Foster families are supported with donations like strollers, diapers and clothing for children who are quickly placed in their care.  Donations make it possible to minister to those in need.  Partners offer prayers for both those who give and those who receive.

The proceeds from STAR sales are given generously to other local organizations with a common mission.  There is a collaborative effort between the STAR volunteers and board to decide who receives funds, often using a “Mission Speed Dating” process to meet and learn more about local groups.  These relationships not only result in funding, but also a common community who work to help those in need.    STAR is the largest cash donor to V.I.S.T.O., an organization that feeds the hungry and so much more.   Some of the past recipients include Meals on Wheels, D.A.S.H., Abigail Arm’s and the Boys and Girls Club.

The volunteer partners each have different talents; some are strong and help carry items, some are organizers, some can create displays, some are natural at sales and many make food for the communal table at lunch.  What they have in common is a joyful heart that rejoices in helping those in need.

And so, what we think is true is true.  It is in the giving that we receive and our hearts are filled.  The partners at Second Time Around Resale give so much to our community and we recognize them as Heroes Among Us as they make Gainesville and Cooke County a welcoming community for all.

Otts Family and Summer Sounds - Contributed by City of Gainesville

Gainesville Teachers of the Year - Contributed by GISD

Firefighters As Role Models Program - Contributed by City of Gainesville

Camp Sweeney - Contributed by the City of Gainesville

Employee of the Year Alex Holland - Contributed by NCTC