Originally the Howeth Family Cemetery, the first to be buried here were Thomas and Louisa Howeth, young children of William and Harriet Howeth. William deeded the ten acre cemetery to Cooke County in 1868. In 1878 Cooke County turned over the site to the City of Gainesville in a 999 year lease. The cemetery’s name was changed in 1897 to East Hill Cemetery, and later in 1904 the name was changed again to Fairview Cemetery. A separate Jewish cemetery adjoined the site from 1881 until 1964 when the two cemetery’s were combined. A chapel and sexton’s office were constructed in 1938 at a cost of $6,296. Fairview Cemetery is comprised of 85 acres and over 20,000 graves.

Fairview Cemetery is dedicated to providing present and future interment needs for the Gainesville community. It is our goal to remember those who have enriched our lives by maintaining permanent records of those interred while providing quality ground maintenance and customer satisfaction. Fairview Cemetery is operated in compliance with the Texas Cemetery Association’s rules and regulations. 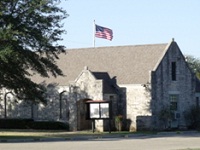